The Rosetta spacecraft is capturing ever more breathtaking views of its target comet that are significantly advancing landing site selection for the history making touchdown on the bizarre worlds nucleus by the attached Philae lander. 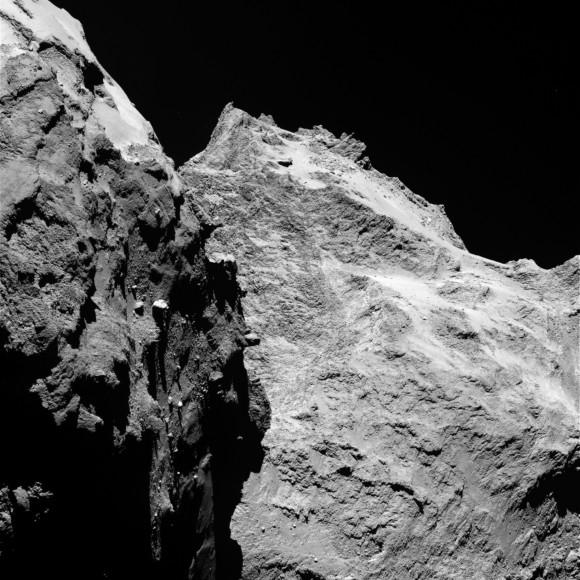 (Jagged cliffs and prominent boulders are visible in this image taken by OSIRIS on 5 September 2014 from a distance of 62 kilometres from comet 67P/Churyumov-Gerasimenko. The left part of the image shows a side view of the comet’s ‘body’, while the right is the back of its ‘head’. One pixel corresponds to 1.1 metres.
Credits: ESA/Rosetta/MPS for OSIRIS Team MPS/UPD/LAM/IAA/SSO/INTA/UPM/DASP/IDA)

Today ESA released the latest high resolution images of Comet 67P/Churyumov-Gerasimenko taken by the OSIRIS science camera on Sept. 5, and is shown above.

Jagged cliffs and prominent boulders are clearly visible in unprecedented detail on the head and body of Comet 67P displaying a multitude of different terrains in the new image taken from a distance of 62 kilometers.

Meanwhile the Rosetta science team is using the OSIRIS and navcam camera images to create a preliminary map of the comets surface. The map is color coded to divide the comet into several distinct morphological regions. 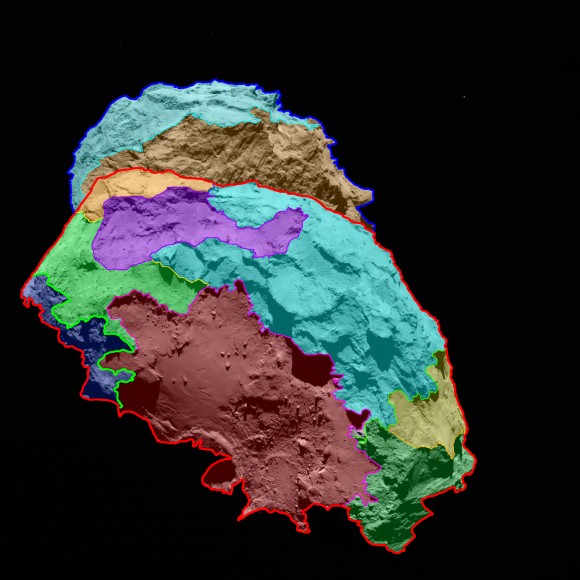 (Several morphologically different regions are indicated in this preliminary map, which is oriented with the comet’s ‘body’ in the foreground and the ‘head’ in the background.
Credits: ESA/Rosetta/MPS for OSIRIS Team MPS/UPD/LAM/IAA/SSO/INTA/UPM/DASP/IDA)

“With various areas dominated by cliffs, depressions, craters, boulders or even parallel grooves, 67P/C-G displays a multitude of different terrains. Some areas even appear to have been shaped by the comet’s activity,” the Rosetta team said in the release.

The images were also shown at today’s scientific  presentations at a special Rosetta research session at the  2014 European Planetary Science Congress being held in Cascais, Portugal.

The scientists are striving to meld all the imagery and data gathered from Rosetta’s 11 instruments in order to elucidate the composition and evolution of the different regions.

The mapping data is also being used to narrow the ‘Top 5’ Philae landing site candidates down to a primary and backup choice.

The final landing site selections will be made at a meeting being held this weekend on 13 and 14 September 2014 between the Rosetta Lander Team and the Rosetta orbiter team at CNES in Toulouse, France. 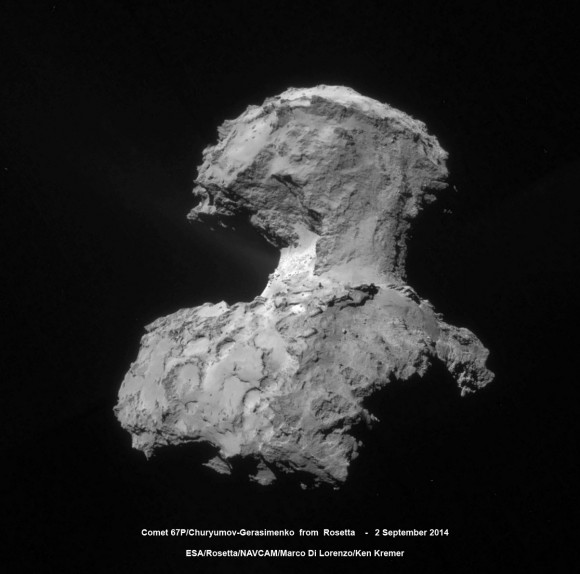 (Four-image photo mosaic comprising images taken by Rosetta’s navigation camera on 2 September 2014 from a distance of 56 km from comet 67P/Churyumov-Gerasimenko. The mosaic has been contrast enhanced to bring out details of the coma, especially of jets of dust emanating from the neck region. Credits: ESA/Rosetta/NAVCAM/Marco Di Lorenzo/Ken Kremer – kenkremer.com)

Philae’s history making landing on comet 67P is currently scheduled for around Nov. 11, 2014, and will be entirely automatic.  The 100 kg lander is equipped with 10 science instruments.

The three-legged lander will fire two harpoons and use ice screws  to anchor itself to the 4 kilometer (2.5 mile) wide comet’s surface.  Philae will collect stereo and panoramic images and also drill 23 centimeters into and sample its incredibly varied surface.

The team is in a race against time to select a suitable landing zone soon since the comet warms up and the surface becomes ever more active as it swings in closer to the sun and makes the landing ever more hazardous.