Meet The Mastermind of Hong Kong’s ‘Umbrella Revolution’ (He’s Only 17!)

CBC News reports, “He may not be considered an adult in Hong Kong, but already 17-year-old Joshua Wong is taking on the government for the second time — along with his tens of thousands of supporters. (Joshua Wong, 17, is the leader of Scholarism, which is one of the groups galvanizing Hong Kong students to demand a fully democratic election when they select their next leader in 2017. (黃之鋒 Joshua/Facebook))

“I think he’s probably one of the most respected leaders,” says Kristof Van Den Troost, a lecturer at the Chinese University of Hong Kong. Van Den Troost has lived in the city for nearly 10 years and has been attending the protests daily since they started.

Wong isn’t old enough to vote, but the lanky teenager has emerged as the face of the pro-democracy protests that have been going strong in Hong Kong since mid-September.

He is determined to make Hong Kong’s 2017 election for the government’s top job democratic. Beijing ruled in late August that it won’t permit open nominations.

Scholarism, a group Wong co-founded, is one of three leading the protests against Beijing’s decision.

It started as a week-long boycott of university and high-school classes, but escalated Sept. 26 on when throngs of students — Wong among them — occupied Civic Square, which houses the city’s central government buildings. Wong and a handful of others scaled a fence and stormed the buildings. They were arrested late Friday. 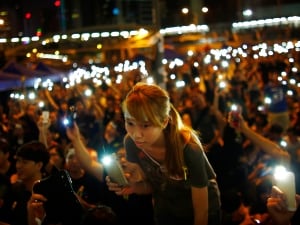 (Protesters turn on their mobile phone flashlights as they block an area outside government headquarters in Hong Kong on Wednesday, Oct. 1. Thousands of pro-democracy protesters thronged the streets, some of them jeering National Day celebrations, and students threatened to ramp up demonstrations if the city’s pro-Beijing leader does not step down.   (Carlos Barria/Reuters))

“The protests really intensified after he got arrested,” says Van Den Troost. “One of the first demands was to release him.”

It’s not surprising, considering the teen in the oversized T-shirts and black-rimmed glasses has quite the loyal following.

He’s gained thousands of followers. More than 200,000 people have liked his personal Facebook page, while his Scholarism movement has amassed nearly 300,000 followers. After he asked supporters to join FireChat, an app that lets smartphone and tablet users communicate when there’s no cellular or internet connection, more than 100,000 people reportedly downloaded it in less than 24 hours.

That momentum started to grow in 2011, during Wong’s first head-to-head confrontation with government policy.

Wong experienced a political awakening that year, he says on his Facebook page, after participating in protests against linking Hong Kong to China’s high-speed rail network.

He found his groove fighting for student rights shortly after. Wong co-founded Scholarism and used the internet to garner support from fellow students against a proposal to include national education in Hong Kong’s curriculum. Wong and many others considered the addition to be socialist propaganda imported from mainland China, which regained control of Hong Kong under the so-called “one country, two systems” method of government in 1997 from the British.

Some 120,000 people answered Scholarism’s rallying call and at the protests’ peak, gathered for a similar occupation of government offices.

​His small stature “marks a significant contrast to his inner strength, determination and will power,” says Lau.

Wong never seems nervous before gargantuan crowds, police or government leaders, says Lau, who last heard him speak before he initiated the Civic Square occupation. “He’s able to convey ideas in a well-organized manner and give responses that are determined and not ambiguous.”

After that successful campaign, media interest in the 17-year-old with the Justin Bieber haircut was so high that Wong had to call a press conference to announce his marks from end-of-high-school public examination last summer.

For Wong, whose focus shifted to pushing for democratic elections after his success with the national education campaign, activism comes naturally.

His parents, Grace and Roger Wong, reportedly took their son to a handful of protests while he was still very young.

They raised him as a Christian — a religion he still identifies with. Wong recalls accompanying his father to visit some of the less fortunate in Hong Kong when he was much younger.

“We have always brought up Joshua to be compassionate, caring, principled and loyal,” Wong’s parents wrote in a joint statement after their son had spent 25 hours in police custody, “and we are very proud of all that he is doing to make Hong Kong a better place for his generation, and our generation.”

Despite the attention and success, it’s clear Wong is still a teenager at heart, admitting that even he can find politics a touch dull.

He calls the discourse around democratic elections “really boring,” in a HK Magazine article, recalling the “tedious” task of writing 3,000 words on electoral reform.

Even though activism is clearly a passion, he’s not necessarily pleased with having the attention focused on him rather than the movement.

In a translation of a Facebook post he wrote after being released from police custody, Wong says he feels “very uncomfortable” with being told that he’s the hero Hong Kong relies on of the Hong Kong pro-democracy movement.

“I even felt it was revolting,” he writes, explaining that the true heroes are all the protesters who were able to stand up to police force while he was being detained.

“The movement is now steered by each and every Hong Kong citizen.”

It’s a sentiment that rings true for Lau, who has been attending some of the demonstrations.

“If you don’t speak for yourself at this very moment, the communist government will define the meaning of democracy for you,” she says. “We don’t want to be a silent victim.””