Dying Sheila Marsh was given this one last chance to see her favourite horse after it was brought to her hospital bedside by caring staff.

The 77-year-old grandmother-of-four was clearly delighted as horse Bronwen gently nuzzled her just a few short hours before she died of cancer.

The scene – photographed at Wigan Royal Infirmary in Greater Manchester after staff moved the patient’s bed outside – reduced everyone to tears.

Daughter Tina, 33, said: “I was crying my eyes out and all the nurses were crying too.

“She took comfort out of it and it was a beautiful moment.

“She loved her horses and she loved and adored all animals. She had six horses, three dogs, three cats and other animals.

“Her condition did not get any better and the hospital allowed us to bring Bronwen in. 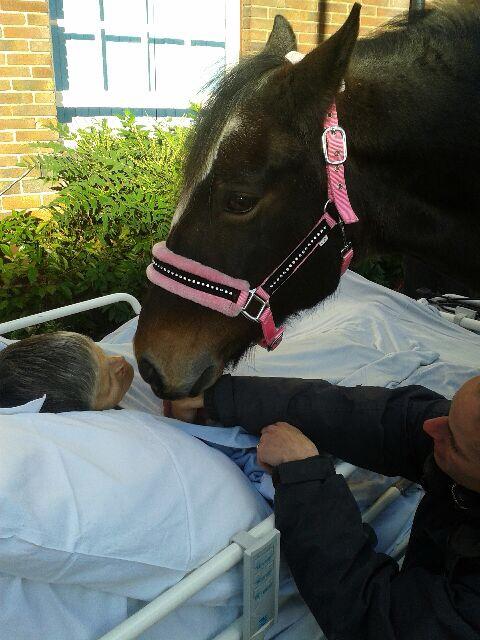 “It was a matter of hours later that she passed away. I want to thank the hospital and all the nurses.

“It was very important for my mum.

“She was one of the most hard-working people that you could meet and she would do anything for anyone.”

Andrew Foster, chief executive of the trust, posted the image on Twitter and said it highlighted how trust staff went ‘the extra mile’ to make Mrs Marsh feel comfortable.

He wrote: “With the family’s permission here is how we go the extra mile to deliver the wishes of a dying patient.”

The post was widely shared and re-tweeted with many saying the image brought tears to their eyes.

Gail Francis, writing on Twitter from Stratford-upon-Avon said: “What an amazing photograph.

“Anything that makes the last days/hours bearable should be applauded x.”

And Lizzie Legate added on the social networking site: “Beautiful moment for them both. Well done everyone for an amazing effort to provide a treasured moment.”