CNN reports, “Authorities have killed almost 5,000 dogs in one Chinese city after rabies was blamed for the death of five people, China’s official Xinhua news agency reported on Sunday. 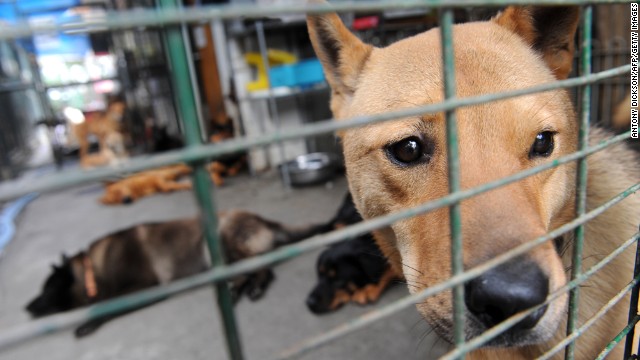 (A rescued dog waits to be adopted in Hong Kong. Image: CNN)

Municipal authorities in Baoshan, in the southwestern province of Yunnan, culled 4,900 dogs and vaccinated 100,000 in its anti-rabies campaign, Xinhua reported.

The report said that four people died from rabies in August and one in July following dog bites.

Rabies outbreaks had been relatively rare in the past five years, Xinhua said. In 2006, at least 16 people died of the disease in the eastern province of Shandong.

China often orders stray dogs to be culled in an effort to prevent outbreaks of rabies but, as dog ownership has become more popular in affluent areas, some animal activists have decried the practice, calling for animals to be vaccinated or sterilized to keep dog numbers down.

According to the World Health Organization, rabies is a virus that spreads to human through close contact from animals, usually a deep bite or scratch. It spreads through the central nervous system, leading to fatal inflammation of the brain and spinal cord.

Effective treatment with a course of vaccines can prevent the onset of symptoms and death.”