Why pot entrepreneurs are moving to Canada

There’s a place where you can buy medical marijuana without any worries, a place where the people growing marijuana wear laboratory-style “clean suits,” where scientists do extensive research into potential treatments using cannabis, and where marijuana business owners can put their cash into a bank account instead of a vault. 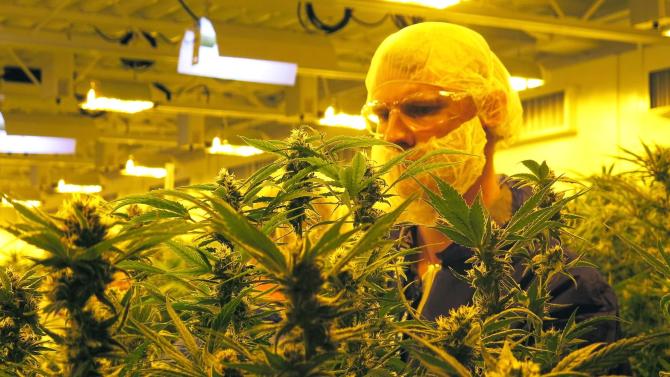 Tilray produces and sells medical marijuana to 4,000 patients through a facility that can produce 4,000 kilograms of pot a year. It opened last year after the Canadian government decided to farm out medical marijuana production to privately run facilities. “We’re one of 15 companies licensed to produce cannabis for patients,” Kennedy said.

Tilray is part of Kennedy’s  Privateer Holdings, a U.S.-based investment company that has raised more than $80 million from a variety of sources, including  Peter Thiel’s   Founder’s Fund.

Stateside, Privateer owns the marijuana review website  Leafly, and it will be marketing  a line of marijuana called Marley Natural with the heirs of Bob Marley. But Tilray is Privateer’s first venture that directly involves growing marijuana, and Kennedy said he would only do what he’s doing outside the United States.

“We like tight, tough regulations, but we also like clarity, and there just isn’t the type of clarity that we see in Canada … in the U.S.,” he said.

Kennedy took CNBC on a tour of Tilray’s state-of-the-art facility. “This is a narcotics vault,” he said, standing above a room surrounded by 10 inches of concrete and rebar, in a complex surrounded by 140 security cameras and a badge entry system that evokes Fort Knox.

“It’s a vault which can store up to $35 million worth of narcotics,” he said.

But there’s no cash inside. Unlike facilities in the U.S., Tilray has a bank. “We bank with RBC, Royal Bank of Canada   (Toronto Stock Exchange: RY-CA),” he said.

Tilray has 40 grow rooms where employees where “clean suits” like you’d see at a Silicon Valley microchip facility. Grow lights in the room where “clones,” or seedlings, are potted and have lights that burn brighter than sunlight at the equator. They run 24 hours a day with plenty of C02 filtered in to provide an effective growth environment.

At least one person working in each room with marijuana has had a background check by the  Royal Canadian Mounted Police. There are rooms for drying, trimming and packaging medical marijuana. Then there’s the lab, where Chief Science Officer Joshua Eades said each batch of pot is analyzed to make sure it’s free of contaminants. “We feel that the Canadian quality control standards are some of the strictest in the world,” he said.

Eades said Tilray can research cannabis in ways not allowed in the U.S., opening up the possibility of future medical treatments. He said there are “huge gaps” in knowledge about the properties of cannabis.

“We want to be leading the cutting edge of research in order to fill those gaps,” he said. Later this year, Tilray executives said they will partner with the University of British Columbia to study the effects of marijuana on post-traumatic stress disorder among Canadian military veterans.

Kennedy said he’s been in hundreds of growing facilities around the world, and he wanted to create a place that’s pristine when it comes to cleanliness. “You go into these places in  Colorado , and I wouldn’t feel comfortable eating a sandwich from Subway there,” he said.

Canada does have limits to its tolerance of cannabis. Insurance will not reimburse for medical marijuana, and patients can buy it only in herb form. No edibles or extracts are allowed.

Kennedy expects that to change, and he has big plans. Tilray staffers have learned much from this first venture, and the next facilities will be much larger, he said. However, none are planned for the U.S. until marijuana is legal on a federal level.

“This is a state-of-the-art facility that is really unparalleled anywhere in the world, and that means it’s really complicated,” he said. “We’re creating a lot of IP (intellectual property) here from scratch.”