In a recent study conducted at Cornell University and the University of Wisconsin-Madison it was discovered (no surprise here) that 80 percent of people using online dating sites lied about their height, weight, or age. Here are a few more things men tend to lie about when online. 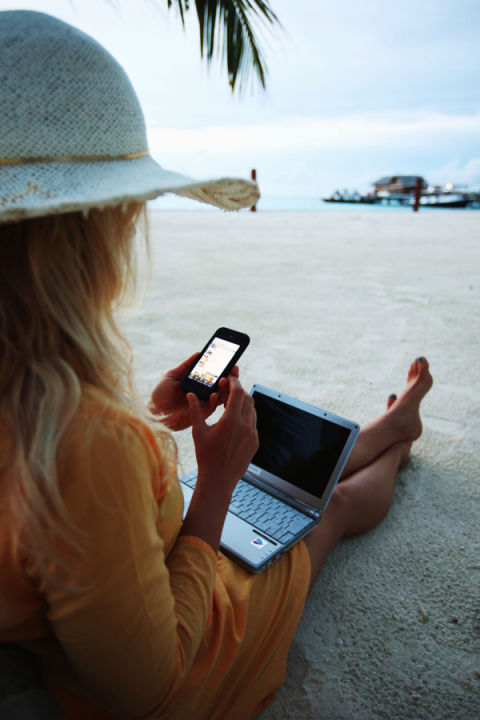 His Job Oh? You’re about to go out with a good-looking CEO of a booming start-up? Don’t be surprised if that means he has a great idea for an app and is working out of his parents’ garage. Most men have a tendency to inflate their titles or responsibilities in order to impress women. It’s not a great idea to ask about his salary, but a safe bet is to ask about his title and how large a company he works for. CEO is very impressive, but not if the company is him and his dog.

His Intention Just because a man is on a dating site does not mean he’s looking for a long-term relationship. In fact, if you’re on Tinder, you should assume that the guy is trying to get laid and be pleasantly surprised when it turns out he wants to date you. Aside from certain apps like Heavenly Sinful, where you’re explicitly asked to say whether you want to hook up or date, the guy’s intention is often unknown.

His Height On average, guys will say they are two inches taller than they actually are, and will assume you’re not going to bring a tape measure to the first date. If you’re curious, you can wait until his wallet’s open while paying for (at least his share) of the bill and say, “Oh! Let me see the photo on your driver’s license. Mine is horrible.” There, as clear as day, is his height (no one cares enough to lie to the DMV).

His Weight Men (well, everyone) will post photos of themselves from when they are looking their physical best. So if you show up on date number one and the guy is looking twenty pounds overweight, don’t be shocked. If you’re lucky it may go the other way; he may have just recovered from breaking up with his long-term girlfriend and lost the gut men tend to accrue when they no longer feel they need to impress their partner. Now that he’s single he wants to look great. But the pessimist in me leans toward warning you that he may be a bit heavier than you imagined.

His Worldliness He may say he loves to travel but that doesn’t guarantee he’s ever left the United States. He may say he knows a lot about wine but that might just mean he knows that he likes Pinot Noir. Don’t assume anything based on the guy’s stated hobbies or interests; just like his job description it is likely inflated and made to sound more sophisticated than it actually is.

His Relationship Status I hate to say it, but even if a guy makes himself available on a dating site it doesn’t necessarily mean he’s there to seriously date. Single can mean anything from “haven’t had a girlfriend in five years and looking for sex” to “newly divorced and sad.” There are men who are going through a break-up (but it’s not quite over with their gf) or are in an open relationship and they are on these sites because it seems innocent enough, but they are not emotionally available to be with you.

His Age One of the most common lies on dating profiles is a man fibbing about his age. More often than not he’s likely older than he is. If you’re in your early twenties and a man says he’s 29 there’s a chance he might actually be a 35 year-old who knows you would never date someone more than ten years your senior. If that’s your thing though, then search for men in that age range… but hope they’re not in their 40s.